“There’s always been narrative film, but there hasn’t been strong experimental film dealing with sports—one of the shaping factors for me was that I’ve always been interested in hockey and in art, two things that are very difficult to reconcile, right?” – Brett Kashmere

Brett Kashmere is a filmmaker and writer living in Oakland, California. Combining archival research with materialist aesthetics and hybrid forms, his work explores the intersection of history and (counter-) memory, sports, and popular culture. Kashmere holds an MA in Film Studies and an MFA in Studio Arts from Montreal’s Concordia University and is currently a PhD student in Film + Digital Media at University of California, Santa Cruz. He is also the founding editor of INCITE: Journal of Experimental Media.

From Deep “looks at basketball and its profound role in American life – as an everyday street game played by millions around the country; a force in fashion, music, and mass media; and a platform for broader issues of race and class. Drawing its imagery from contemporary pick-up games, contemporary films, music videos, and spectacular sports footage, Kashmere charts a history of the game over the last century, including its rapid cultural rise in the 1980s, with the global branding of Michael Jordan; basketball’s growing connection with hip hop culture; and its multiplying fan base, which laid the groundwork for the sport’s significance today.” – [Amy Beste, Conversations at the Edge]

A desktop postscript to From Deep, reflecting on the past half-decade of sports’ convergence with politics and race in American culture.

This program offers a cross-section of the ways that athletics have been treated historically in artists’ film and video; from examinations of the vernacular and sports’ mass mediation, to interplays with its accoutrements, geographies, architectures, and audiovisual grammar. My intention in exploring the convergence of sports and experimental media (more accurately, the induction of sports into experimental media), is to suggest an equivalence of practice, skill, and flow, and to nudge a conversation. What can the media arts provide formal and critical analyses of sport? And conversely, how might popular conceptions of sport inform and enrich nontraditional approaches to the representation and examination of athletics on screen? Here I conceive of the relationship as a non-zero-sum game, where both sides (potentially) benefit. Or, alternately, one that opens a space for productive failures. – [Brett Kashmere]

“Forgetting its ‘psychological plot’ this film is a fine exponent of the intrinsic magical power of cinema. Its images, which evolve in a rather unmagical sober suburb, are continually transcended and manipulated into a kind of epic haiku of superimpositions and textural weavings.” – [Jerry Hiler]

“… ten dense minutes of collagistic mayhem… Television images of a boy paddling a boat and an arena crowd cheering, plus film shots of bright pink and red flowers and a toy phone, are intercut with frenetic drawings in Breer’s trademark heavy crayon, principally of baseball games. Breer inserts a photo of himself with a question mark scrawled over his head, accompanied by the words ‘Don’t be smart.’ But he can’t help it – he is.” – [Katherine Dieckmann, The Village Voice]

“In a fractured explosion of densely layered movement and action, images of Olympic sports events are mixed with Paik’s recurring visual and audio motifs… Ski jumpers, skaters and hockey players are re-edited, fragmented, colorized, accelerated and transformed, colliding on the screen in a frenzy of synthesized energy.” – [Electronic Arts Intermix]

In 1971 at Bell Labs, artist Lillian Schwartz collaborated with Kenneth Knowlton to create Olympiad, a rhythmic and mathematically rigorous 16mm computational film that was inspired by the cycles of kinetic human form captured by 19th century photographer Eadweard Muybridge.

“His films are like a roller-coaster. His way of throwing the act of seeing into utter confusion is an attack on the eyes in their corporeal function, and to attack the eyes is to take on the body itself as your opponent. The film makes you break out in sweat only by shooting a safe, peaceful gymnasium in the dark.” – [Koharu Kisaragi]

“A volleyball is rolled into the frame and comes to rest. Two legs in sneakers, seen from the knees down, enter the frame and stand beside it. Cut to new angle, same characters and actions.” – [Video Data Bank]

“Watersmith is a mind movie. Hindle turns his film into a celebration of the freedom of bodies moving through water, the implacable grace of human forms freed from gravity. It ripples between reality and abstraction. There hasn’t been a movie quite like this since Leni Riefenstahl’s Olympia.” – [Entertainment World] 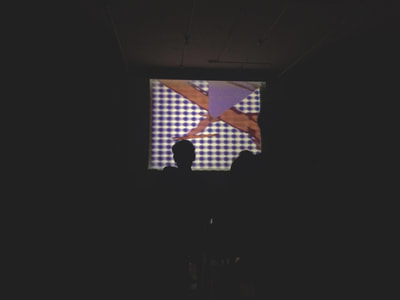